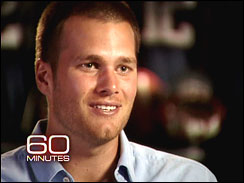 So, at work, I tend to enjoy listening to something entertaining while I write/fix/stare at computer code. This often means that I listen to lots of sermons/talks by guys like John Piper, Francis Chan, Louie Giglio, Mark Driscoll, Rob Bell (yes, I think it’s good to listen to people you don’t necessarily agree with), Any Stanley, etc…

Recently, I discovered the 60 Minutes podcast. Friends, this was a gold strike, not only because it’s really entertaining and enlightening, but also because the subject matter they choose to tackle is awesome — and usually pretty well-balanced.

Yesterday, I listened to a show that featured a segment on Tom Brady, the quarterback for the Patriots. I wasn’t very interested at first, since I don’t really follow pro sports, and don’t really care about the Patriots… I was actually just listening because it came right after a segment on Joel Osteen, which I thought was really well done…

Anyways, the segment goes on and on about how Brady is the most underrated player in football and blah blah… and how he has so much stuff and dates a supermodel and blah blah…

And then I heard something I re-played a couple of times. The interviewer, Steve Kroft, talked about Brady’s great success leading the Patriots to a 15-0 record this year, and how he was named male athlete of the year, and here was Brady’s response:

“Why do I have three Super Bowl rings and still think there’s something greater out there for me? I mean, maybe a lot of people would say, ‘Hey man, this is what is.’ I reached my goal, my dream, my life. Me, I think, ‘God, it’s got to be more than this.’ I mean this isn’t, this can’t be what it’s all cracked up to be.”

Kroft followed up and asked, “What’s the answer?” Brady’s response:

“I wish I knew. I wish I knew. I love playing football and I love being quarterback for this team. But at the same time, I think there are a lot of other parts about me that I’m trying to find.”

Wow. Talk about from the horse’s mouth!

I sat there at my desk and wished I could sit over coffee with Mr. Brady and tell what I’ve discovered about a fulfilling life. I wished I could introduce him to all the guys noted above and let them tell him what life’s all about….

No more than an hour later, I found that Tom Ascol over at the Founders Blog already beat me to the punch. Not that he took Tom Brady out to lunch, but he wrote what he would say if he did. His response is a fair bit lengthier than mine would probably be. He talks about Augustin and Pascal and searching for meaning, and lines out the Gospel as well.

I think I agree with everything he says there, but for those with a shorter attention span — as well as all the folks who haven’t been to seminary yet — here just a few short thoughts from me that I would love to expound to anyone interested:

We (mankind) were made to worship, and we all worship something.

Often, the object of our worship isn’t clear to us because we lack perspective. Many people worship their jobs or their children or their dreams. Some of us worship our past our an ideal of who we could be. For women this often takes the form of the appearance they want to have. For men, it has more to do with career success and bank account balances, but not always…

All we have to do to discover the object of our worship is to ask a couple of questions:

“What do I believe will bring me satisfaction/fulfillment?”

“When people look at my life, what appears to be the most important to me?”

Many of us will spend our whole lives pursuing an idol, and in the end we will find that it can never fulfill us.

Tom Brady is in the unique and enviable position of having a tight grip on all that he as pursued in his life at a very young age, and he is discovering what Solomon wrote thousands of years ago: it is all vanity.

God alone is worthy of our worship, and He alone can satisfy the desires of our hearts. Anything else we give our worship to is an idol, and will leave us empty.

“…for my people have committed two evils: they have forsaken me,the fountain of living waters,and hewed out cisterns for themselves, broken cisterns that can hold no wate…” (Jeremiah 2:13)

“…In Your presence is the fullness of joy, and at Your right hand are pleasures forevermore…”

What are you giving your life to?

Is it satisfying you?