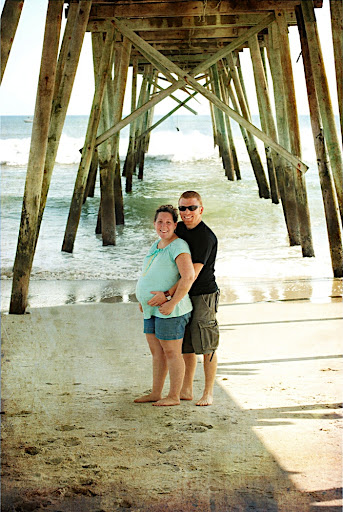 About 4 weeks ago, I wrote a first batch of lessons learned from having a baby

It got fairly lengthy, so I stopped at a couple of points, but lately I’ve been thinking about 2008, and what it involved and what we learned, and mostly 2008 was about the pregnancy process for us.

And gosh a good a handbook would have been nice. Not the “What To Expect When You’re Expecting” kind of book, that’s 350 pages long and doesn’t tell you any of the things you really need to know. I mean like a very concise, “Here’s What Happened To Me” kind of thing.

So, without writing a whole handbook, here are a few more things that we learned along the way:

Collaborate On The Pregnancy Test

OK. So here’s what you don’t want to happen: wife gets up (doesn’t wake up, because she was up all night waiting for morning), wakes husband up, and runs into the bathroom to take the pregnancy test. She comes back 2 minutes later with the positive pregnancy test proudly in the air and a big smile on her face, only to find said husband still mostly asleep and thinking primarily about his need for a cup of coffee. Wife gets very emotional and assumes husband doesn’t care that she’s pregnant. You see where it goes from there…

Of course this is just hypothetical…

But guys and gals, you might want to compare notes about when that test is going to happen. And fellas, you should go ahead and make a plan to get up extra early and get that cup of coffee or something.

The Pregnant Woman Stereotypes Are Only Sort Of True

You know the “Father Of The Bride 2” stereotypes about pregnant women? They love spicy foods, pickles, and random/disturbing combinations of food?

Those are sort of true.

The reality is that a pregnant woman’s body is so constantly changing that she’ll likely go through lots of phases during those 9 months.

And I don’t mean it like “Oh that’s cute. Her body is changing.” I mean you will be married to like 5 different women over the course of a few months.

First she’ll spend a month convinced that you never wanted this baby in the first place, and she’s all alone.

Then she’ll probably be too sick to care about that any more, and she’ll just want to be left alone… except simultaneously waited on hand and foot.

If and when the morning sickness wares off, that’s when the appetite might kick up for a while. Steph blew away an economy size jar of pickles in a week. But, then she didn’t want pickles any more for the rest of the pregnancy. She moved on to peppers form there, but got sick of those as well, and then it was salsa, then pizza… you get the idea.

At some point she’ll spend a couple weeks convinced that the baby isn’t going to make it.  Don’t bother telling her that that’s silly… not a good idea to tell a pregnant woman that she’s silly…

This is about the time when she’ll actually (and probably for the only time in her life) complain that her stomach isn’t big enough. She’ll freak out because her stomach isn’t growing fast enough to make room for the baby that she imagines to be growing in there.

Eventually that transitions into stage 1 of the nesting period. This is where you have to go register for $11,000 worth of stuff for the baby so people can buy it for the baby showers that are sure to happen.

Stage 1 of the nesting period eventually transitions into stage 2. This is where she’ll suddenly realize, “We need a nursery!” For the next month you’ll spend lots of time at places like Babies R Us looking at nursery stuff. What makes this part interesting is that at this point, she’s usually like 6 months pregnant, and convinced that she’s going to have a baby any day, so everything is absolutely urgent. You can’t buy that thing tomorrow. You have to go today. What if we go into labor tonight?

Ironically, this when she shifts the other way and starts to get really self-conscious that her stomach is too big. She’ll say she feels like a whale and will likely assume that she is unattractive. She’ll think it’s silly and patronizing when you tell her that pregnant women are beautiful, and especially her because she’s carrying your baby. You’ll have to get creative…

Once the nursery is in order, and the baby showers have come and gone and all the right stuff exists, stage 3 of nesting kicks in. This is a real sight to see. Your house will never be more clean and orderly than during stage 3 of nesting. She’s gonna clean every closet, every drawer, every corner of your house.

Finally comes the end, where false-labor kicks in. This can be tough, because almost daily she’ll think she’s in labor, but want to keep it a secret for a few hours so she can drop it on you at the last minute and have one of those ‘rush to the hospital’ scenes right out of a movie. But when she realizes that the baby ain’t comming today, she’ll get bummed and you’ll have to remind her that this might be the last day you have alone together.

I’m sure there are other important details I’m missing, but those are the basics of the stages of maternity.

This all leads up to delivery day, which brings out the last point for this post:

Get Your Game Face Ready For Delivery Day

Alright. I don’t even need to spell this one out. Just look at all the ingredients for a rough couple weeks.

So there you go. That’s what’s waiting on the other side of the delivery room. Bring your game face.

…and hope that your hospital has a Starbucks…

What am I leaving out here?