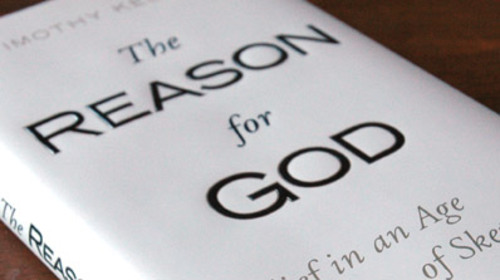 Off and on, for like a year now, I’ve been reading The Reason For God, by Tim Keller, pastor of Redeemer Church in New York.

I’ve read lots of ‘apologetic’ books over the years, and chewing up the meat and spitting out the bones, I learned a lot form those books. But they tend to all say the same thing, so without some prodding, I never would have picked up Keller’s book. However, after reading so many good things about it on various blogs and articles, I decided to pick it up, and man, am I glad I did.

The Reason For God is incredibly smart, well-written, humble, clear, and focused on the present American culture. It’s full of specific responses to guys like Richard Dawkins and William Dennett.

Not only that, he has a lot to say that I don’t really think anyone else is saying.

If we believe God exists, then our view of the universe gives us a basis for believing that cognitive faculties work, since God could make us able to form true beliefs and knowledge. If we believe in God, then the Big Bang is not mysterious, nor the fine-tuning of the universe, nor the regularities of nature. All the things that we see make perfect sense. Also, if God exists our intuitions about the meaningfulness of beauty and love are to be expected.

If you don’t believe in God, not only are all these things profoundly inexplicable, but your view — that there is no God — would lead you not to expect them. Though you have little reason to believe your rational faculties work, you go on using them. You have no basis for believing that nature will go on regularly, but you continue to use inductive reasoning and language. You have no good reason to trust your senses that love and beauty matter, but you keep on doing it.

“You can’t, except in the lowest animal sense, be in love with a girl if you know (and keep on remembering) that all the beauties both of her person and of her character are a momentary and accidental pattern produced by the collision of atoms, and that your own response to them is only a sort of psychic phosphorescence arising from the behavior of your genes. You can’t go on getting very serious pleasure from music if you know and remember that its air of significance is a pure illusion, that you like it only because your nervous system is irrationally conditioned to like it.”

Of course none of the clues we have been looking for actually proves God. Every one of them is rationally avoidable. However, their cumulative effect is, I think, provocative and potent. Though the secular view of the world is rationally possible, it doesn’t make as much sense of all these things as the view that God exists… Those who argue against the existence of God go right on using induction, language, and their cognitive faculties, all of which make far more sense in a universe in which a God has created and supports them all by his power.

(I stole the header photo from here)