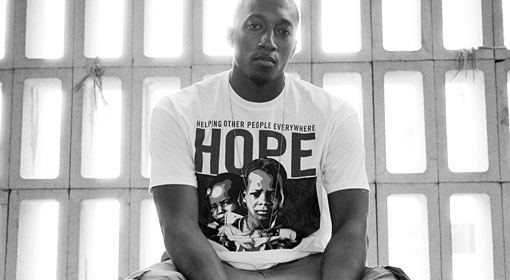 You’ve seen Lecrae pop up on this blog a few times now (like here).

He’s been around for a while, but for years, I used to walk right past his albums at the christian bookstore. I can’t really explain why…  I just looked at the album covers and assumed the music would be cheesy, like most almost all ‘christian’ rap.

His newest album, Rebel, is the bast rap album in the history of the world I’ve ever owned.

One of the catchiest songs on the album is all about the Church, and called “The Bride“, (in reference to how the Bible says that the Church is the Bride of Christ).

The theology on this track is astounding, and the message is desperately needed in the Church at large today.

There are so many misconceptions about what the Church is, and isn’t.

…so many churches teaching bad theology and making the rest of us look bad.

And maybe probably the worst part: so many people giving up on the Church because it isn’t what they want it to be.

Recently, at the Advance 09 conference, pastor Mark Driscoll gave a great message about what the Church is and is not.

Everything he said was insightful and important, and this track captures it really well.

I’m sure it’s kind of awkward to read lyrics to a rap song, especially if you’ve never heard it, but check this out (emphasis mine):

Hook:
Yeah she may look gritty
When her man come back she gone look so pretty – She the Church
You might see her acting crazy, be patient with her tho cause she still God’s baby – She the Church
Before you dis her get to know her, Jesus got a thing for her and He died just to show her – She the Church
She ain’t bricks and buildings
She all of God’s people Men women and children – We the church

Verse 1:
She’s a building of beings being constructed
Christ is the cornerstone, foundation build on another and you’s a goner holmes
She’ built on Him, supported by Him, conformed to Him, now she’s a body of bodies who transform through Him

A temple that breathes we are the halls,
we are the floor board or more we are the walls
Manifold wisdom of God no longer a mystery
The church pinnacle of our salvific history
One flesh union homie
The Tri-union is glorified through our corporatized communion
Still the present reality is she was born a casualty though she’s made alive
She’s still affected by depravity
Once lived in sin and enslaved by her lust and
folks catch her slippin and they turn away disgusted
She’s a work in progress Christ is the head of her
And He wash her clean with the words that He done said to her
She’s already pretty but she’s really not dressed and sometimes she look silly but she’s far from a mess
Yes, please so don’t be dissin cause Jesus done paid grip an
And if you didn’t then should caller her Misses. I’m talking bout the church

Verse 2:
Her name is ecclesia meaning the assembly
Bows to the Trinity No other Divinity
A body family and community she is all one/ but on earth you see her in congregational small ones/ a microcosm or a small scale example/ but it is the church even though its just a sample/ Invisible spiritual/ physical visible/ not a brick temple never that simple/ this a not a building/ she is not bricks/ she’s a world changer but ain’t bout getting rich/ perpetrating fakes cause a lot of folks to hate/ plus her hands get dirty and her feet get scraped/ and sometimes her body parts start acting outta place/ legs tryna be arms/ arms thinking they the face/ but she’ll never be replaced with a one man band or a small Taliban with no body in command

Verse 3:
Some don’t get it so they hate/ they say she’s on a paper chase they say she’s really fake/
So they go start a ministry so they can do the work/ but they don’t understand how Jesus feel about His church/ and yeah they make disciples/ they got plenty conversions/ they take care of the widows and the orphans they be workin/ But none of them are churchin/ no church structure/ no elders and no discipline/ they have no conductor/ and they so they don’t submit/ but quite a few of them baptize/ people how I pray that you’d look at this thing from God’s eyes/ take responsibility inside the whole council not just the area where you might have a mouthful/ who should folks submit to/ who will conduct the discipline/ if excommunicated what body will they be missing then/ look at Ephesians 4 where Paul gets practical/ 1st timothy and Titus if you thinking I’m irrational/

What’s your favorite and /or least favorite thing about the Church / your local church?