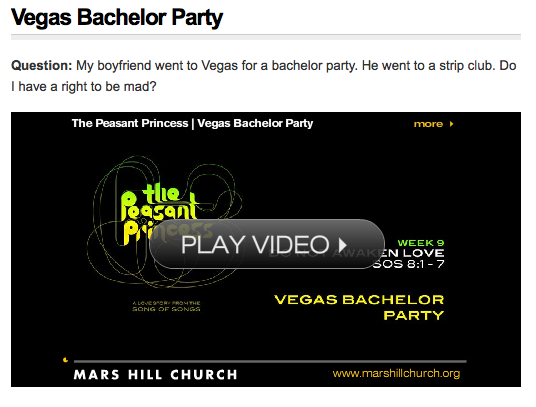 One really good idea that the folks at Mars Hill Church have implemented is a question and answer session after various sermons.

The way it works is that listeners can text questions during the sermon, and someone backstage collects and filters the questions, and then delivers them to the pastor at the end of the sermon to answer on-the-fly.

Of course this is risky, because it leaves the possibility for the pastor to get totally blind-sided by strange or uncomfortable questions. But it is also a very useful idea, because it gives people the opportunity to ask real questions that the sermon brings to mind, and for everyone to benefit by hearing the answer.

A couple of months ago, during a sermon series on the Song of Salomon — during which pastor Mark taught a lot about relationships and biblical manhood and womanhood — the following question was asked:

My boyfriend went to Vegas for a bachelor party. He went to a strip club. Do I have a right to be mad?

So many guys I know struggle with temptations toward lust and pornography, and our culture makes that feel so normal and acceptable. It feels like such a victimless crime — like an innocent vice.

Take five minutes and watch the video of pastor Mark’s response, and let him push back hard against those lies.

(I couldn’t figure out how to embed the video, so you’ll have to watch it at the Mars Hill blog — just use the link!)