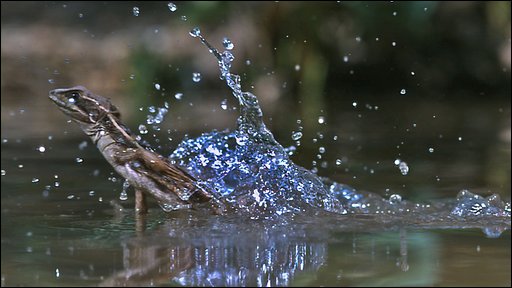 While sitting in my cube this afternoon — twiddling my thumbs and waiting for some processes to catch up with me so I can keep working — I came across this article on the BBC.

That lizard in the photo above: it’s called the “Jesus Christ” lizard.

Because it can walk on water.

They drop into the water and then run across it, earning the lizards their nickname, the “Jesus” or “Jesus Christ” lizard.

Exactly how they do so is revealed by the slow-motion, high-definition footage taken at 2,000 frames per second.

“Because they run so fast they create a bubble as their feet hit the water and then they push off from this bubble before it bursts,” says Simon Blakeney, a producer on the Life series who helped direct and film the footage of both reptiles.

“They can only run at that speed. If they were going any slower, for example, they wouldn’t stay upright, they would slip into the water and would have to swim.”

How insanely awesome is that?

And then there’s this little guy, the pygmy gecko: 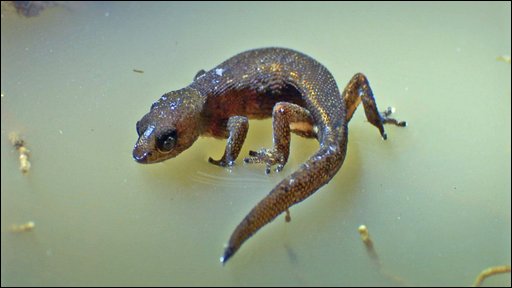 Again, from the article:

At just 2 to 4cm long from head to tail, the Brazilian pygmy gecko (Coleodactylus amazonicus) could be battered by a raindrop and risk drowning in even the smallest pool of water.

So it has evolved to be essentially waterproof, which in turn allows it to walk across the surface of any puddle it encounters.

Can you imagine God’s creative process?

“This guy will be fun. I’m going to make him especially sensitive to water and then give him the ability to walk right across the top of it. Scientists will have a blast coming up with a theory on how this works…”

He made you, by the way…