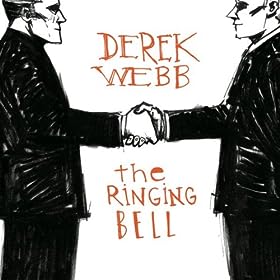 Derek Webb is one of the best musicians that you’ve probably never heard of.

He has a niche of followers who love his music and wrestle with his message, but I’ll bet that if you’re over 25 and reading this, then the name is new to you.

If that’s the case, do yourself a favor and go get one of his albums. Any one will do.

You don’t even have to risk spending your money on something that you may not like! Derek is actually the founder of NoiseTrade, where you can download an album for any price you’re willing pay, or for free if you’re willing to recommend it to five friends!

I’ve been enjoying Derek’s music since he came and performed at NC State several years ago. I remember sitting at Derr track and watching him — nothing but a mic, a guitar, an amp, and some pedals — introduce me to “Where The Streets Have No Name” by U2…

A so-called ‘christian’ artist singing a U2 song that has nothing to do with Jesus.

Was this a mistake?

Were the Campus Crusade staff people scrambling to huddle up and figure out what to do?

And so began a long series of lessons that Derek Webb has been instrumental in my learning.

His music constantly challenges me to think rightly about the Church, culture, morality, and Jesus.

He has helped me love the difference between those four words, and their interrelation.

My new favorite song, from his last album (not his newest album), is called “This Too Shall Be Made Right“.

It’s a recongition that this earthly kingdom is broken, but that it won’t always be.

It’s a song of mourning and hope.

I think of so many people I love when I hear those words.

This about what happened in Indonesia this week. And how much was that coffee you’re drinking?

You can read all the lyrics here.

Do you have a favorite Derek Webb song?