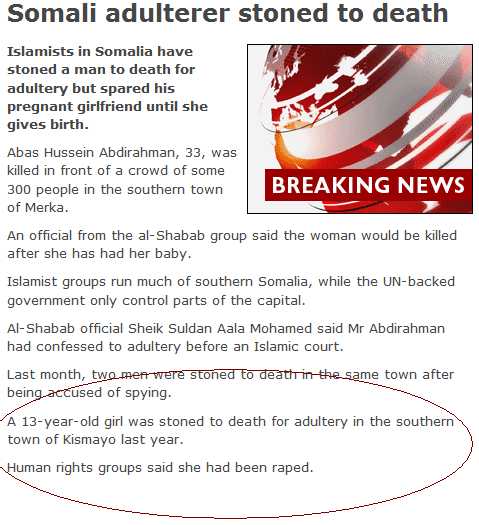 This is part of a screenshot from this article on the BBC today.

In case you’re on a mobile device or behind an office filter that blocks the picture, the article begins:

Islamists in Somalia have stoned a man to death for adultery but spared his pregnant girlfriend until she gives birth.

I am surprised that the BBC considered this story to be worthy of their main RSS feed, and I applaud them for posting something that is actually worthy of our consideration…

In a culture where the headlines are usually dominated by celebrity gossip and the latest tech toys — which, I confess, are as appealing to me as they are to you — It is rare and refreshing to be reminded about the harsh realities of the world.

I recognize that that statement seems contradictory.

What is refreshing about remembering the world’s harsh realities?

Well, for one thing, it puts things in perspective.

A 13-year-old girl was raped, and then legally murdered for having unwillingly committed the “crime” of adultery.

And this all happened in accordance with and submission to Islam – a global religion boasting 1-2 billion members around the world.

Think about that for a minute.

Suddenly the freedom to go hear the Gospel proclaimed seems glorious, and the 30-minute drive isn’t as bad as you made it out to be…

Stops you dead in your tracks.

Before you consider the temptation to chalk this up to a corrupt culture, please consider that in Somalia, a woman committed adultery and they are going to kill the woman and ‘save’ the child from her sin.

If this had happened in America, there’s a strong likelihood that the parents would kill the child to ‘save’ the mother from the effects of her sin.

But sin is sin and murder is still murder, no matter what culture you live in.

And that’s why God’s grace is so AMAZING.

She didn’t deserved to be killed for her sin.

And those cowards who hide behind their religion and stand with their smug sense of self-righteousness in judgment over those who are innocent?

I have heard and understood the Gospel, and experienced God’s grace, and I still commit the same sins.

And yet God shows me GRACE.

He sent Jesus to absorb all the wrath I justly deserve.

…and all the wrath that those Somali cowards who did this deserve.

He sent Jesus to absorb all the wrath that YOU deserve.

This is the beauty of the Gospel! Religion tells you that you have to do things to earn your righteousness, so that then you can judge other people.

But the Gospel is the Good News that you can NEVER earn your righteousness, and that’s why Jesus came!

He opened the door to God’s grace!

Have you looked in to it?

Islamists in Somalia have stoned a man to death for adultery but spared his pregnant girlfriend until she gives birth.