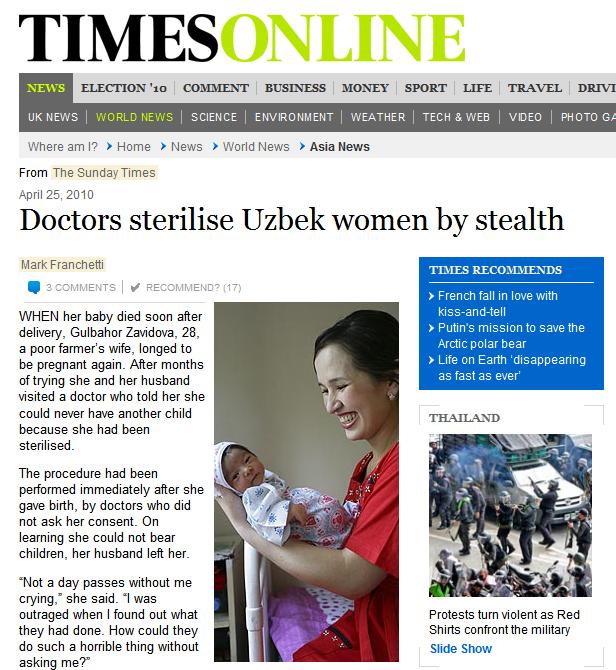 The article I just stumbled over begins:

WHEN her baby died soon after delivery, Gulbahor Zavidova, 28, a poor farmer’s wife, longed to be pregnant again. After months of trying she and her husband visited a doctor who told her she could never have another child because she had been sterilised.

The procedure had been performed immediately after she gave birth, by doctors who did not ask her consent. On learning she could not bear children, her husband left her.

“Not a day passes without me crying,” she said. “I was outraged when I found out what they had done. How could they do such a horrible thing without asking me?”

According to human rights groups, tens of thousands of young women like Zavidova have been sterilised without their consent in the authoritarian former Soviet state of Uzbekistan.

Uzbek sources say the measure was ordered by Islam Karimov, the president, who has ruled with an iron fist for 20 years. The policy is aimed at keeping down the country’s poor population — with 28m people, it is Central Asia’s most densely populated state.

I think something about our demoralized American sense of reality will tempt us to assume this is some kind of over-dramatization or over-simplification. But it isn’t. I saw the corruption of the Uzbek government for just shy of a year while I lived there, and I have no problem believing this.

It’s a dark, hopeless place with a dark, murderous, and thoroughly corrupt government.

Please pray for them with me.