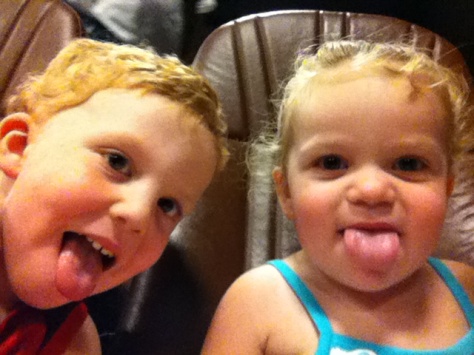 Warning: this is one of those sappy posts that is borderline annoying, especially to those of you without kids. But it was a precious parenting moment…

J was REALLY excited about going to the indoor playground at the mall. And as tends to happen when he’s really excited, he was having trouble behaving.

He desperately needed me to commit that we would make it to the playground, and I kept telling him “we will see”. I wasn’t trying to be mean, but didn’t want to make a promise and then have to take it back if the kids starting freaking out or needed to be disciplined.

He couldn’t live with that, and really wasn’t interested in going anywhere or doing anything until he got a firm ‘yes’ on the playground…

Pretty soon he started to melt down a little bit, and I got angry because he was acting so whiny and un-like the son that I usually love to parent, when K, completely unprovoked, walked up to him, put her hand on his chest, and with a face full of one-year-old motherly concern, said,

An addition to being totally adorable, I thought it was a really profound moment.

She didn’t try to comfort him about whether we’d go to the playground or have fun:

she just affirmed him.

We named her “grace” (albeit in ancient Greek).