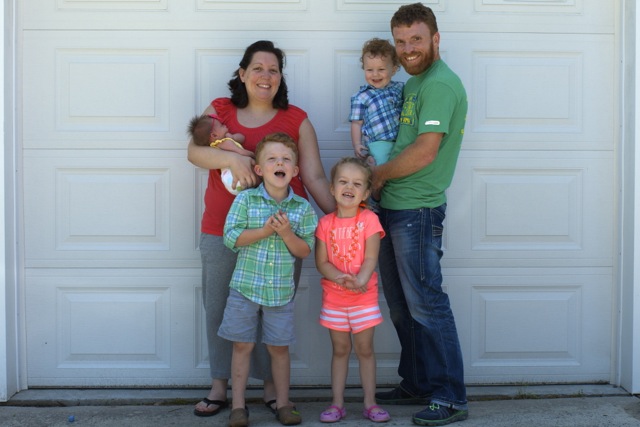 I’m supposed to be working now, but my work computer is in the bedroom, and Stephanie’s 4-7 nap is crucial.

So, here I sit, next to the “mommaroo“, pacifier at the ready in case Ainsley wakes up.

Down the hall, our 1-year-old will start to stir soon. Thankfully, he’ll play in his crib for a while before he starts yelling. He has been cutting SIX (five more than one) teeth for the past couple of weeks and to say that he tries my patience would be like saying that the folks at the DMV aren’t very friendly or efficient. Suffice it to say that I’m VERY hopeful that he’ll return to his usual happy-go-lucky self soon.

Next to him, my almost-4-year old and 5 1/2-year-old will sleep until I come get them up. Kharis will already be laying there, awake, with a smile on her face. Josiah will have to be asked and then ultimately threatened several times before he gets out of bed. That should be fun in the Fall, when he will need to get up at 5:30 for school.

And yep: kindergarten is a half-hour away. This is one of many, many reasons we ask God on a daily basis to provide us with a bigger house much closer to Durham.

(do I digress if this whole post is a random rant in the first place?)

At breakfast, both of my older munchkins will take an absurdly long time to eat their breakfast. Does anyone else have this issue? My kids are fairly good eaters, but they take FOREVER. Josiah will literally take 45 minutes to eat a bowl of cereal – which inevitably ends with him complaining that “it’s soggy” and me gracelessly pointing out that that’s because he’s been staring at it for 20 minutes. Breakfast every morning ultimately ends with my desperate threat, “I’m setting the timer for 10 minutes. If your food isn’t gone before the timer goes off, then you’re done eating until lunch.”

After breakfast, I’ll get dressed and head off to work, leaving my already-exhausted-from-nursing-all-night bride to take care of all four of the kids for the rest of the day.

It’s a weird feeling when I head off to work with a sense of guilt – even though I’m about to drive 90-minutes round-trip and work a full day standing at a desk hacking out code – I know that my day is about to be more peaceful and less exhausting than my wife’s.

But that’s where our life is at right now.

And when those days are gone forever, I know we’ll miss them.

So between now and then, I’m trying to practice Jim Elliot’s words of wisdom: Wherever you are, be all there.